The couple chose a beautiful dusky pink theme which was coupled with soft creams and mint greens.

The Bridesmaid dresses were a beautiful ‘Ash Rose’ so we chose ‘Blooming Dahlia’ and ‘Crème de Péché’ pantones to create the couples colour pallet. We accompanied it with ‘Nile Green’ to tie the colours together.

Rachael & Brad loved roses so we knew they would take centre stage in their designs and they decided to include diamanté to add that extra sparkle. 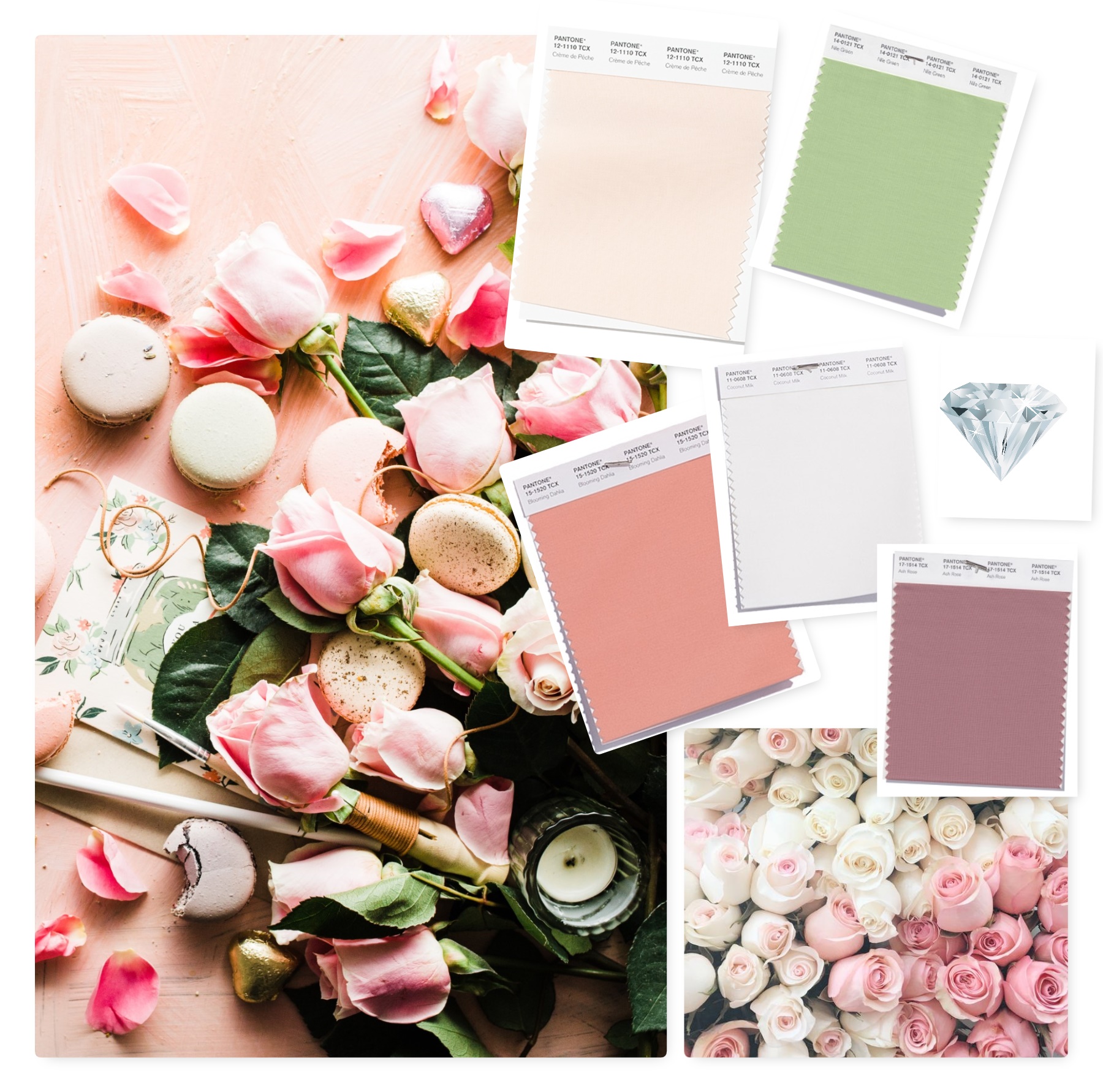 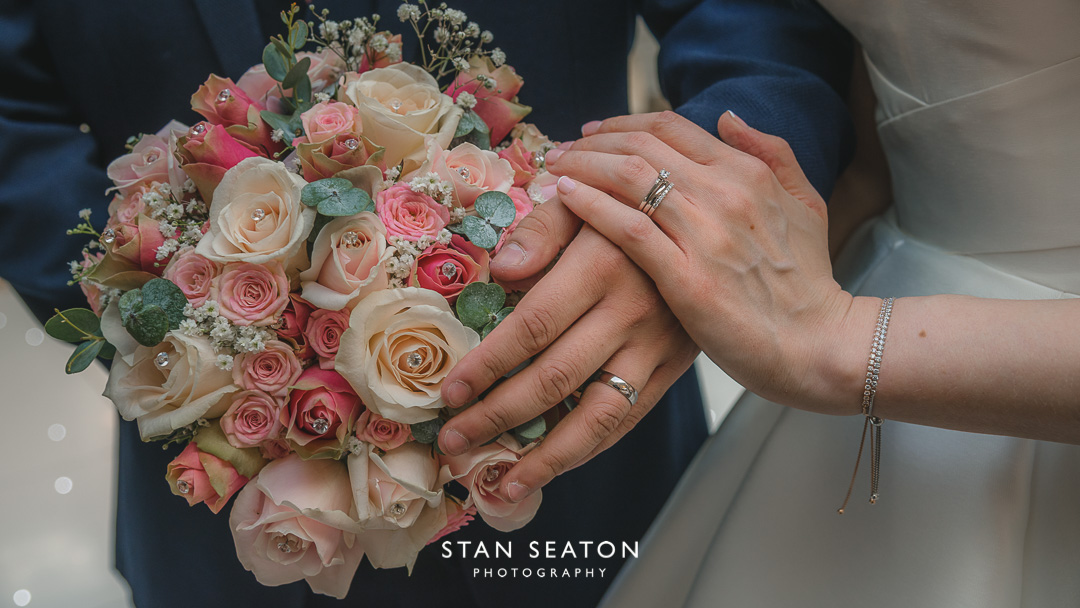 As promised, Roses were predominant in Rachael’s handtied bouquet. We used four varieties of roses in differing colours and sizes to create the ‘Blooming Dahlia’ and ‘Crème de Péché’ pantones. We used diamanté pins in the roses to create that wow factor and gypsophila and eucalyptus throughout the bouquet to soften and create the finished look. 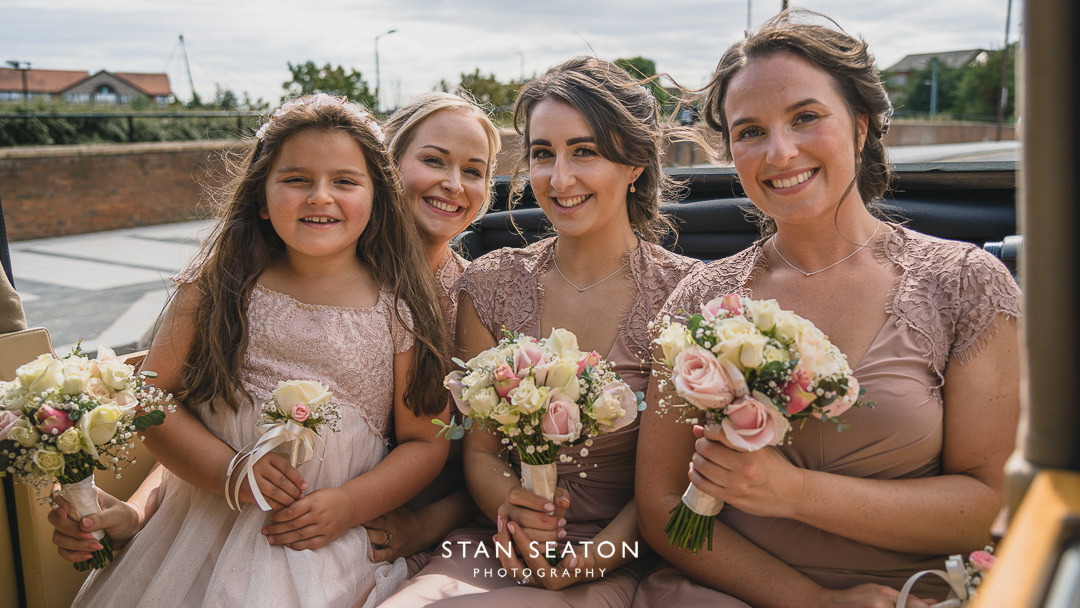 ‘Crème de Péché’ and ‘Nile Green’ were the principal pantones used to create a subtle contrast against the ‘Ash Rose’ of the bridesmaid’s dresses. Beautiful soft pink roses were also included to create the ‘Blooming Dahlia’ pantone and to complement Rachael’s Bouquet. 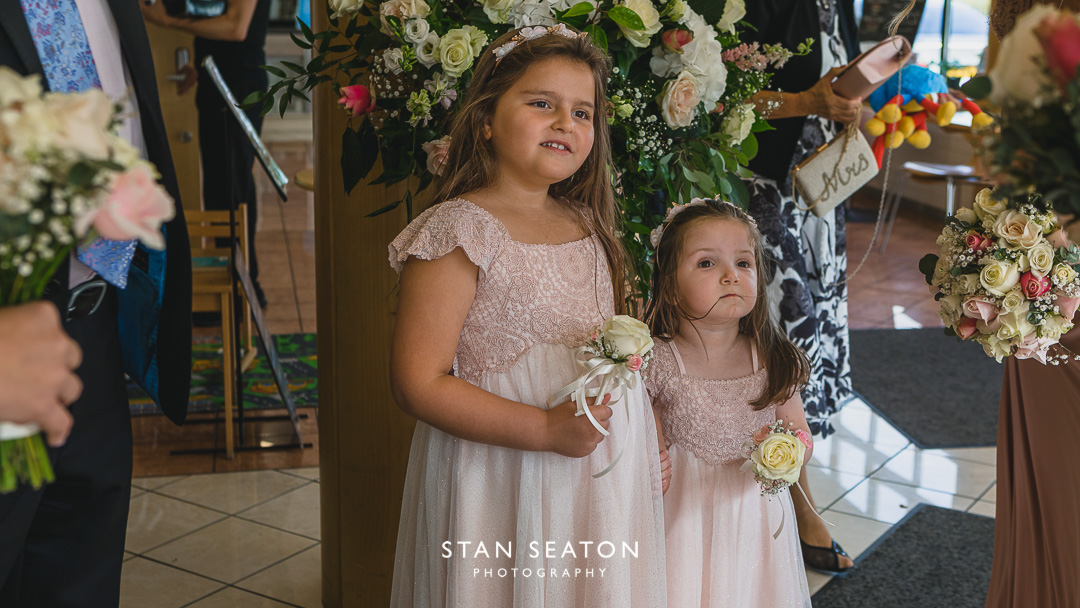 We created wands for the younger bridesmaids, which were really simple and effective. They were created using only a couple of stems of gypsophila, spray roses and one cream rose arranged to create a wand effect.

These were perfect for the flower girls and young bridesmaids, as they are light and easier to carry than a traditional handtied posy. 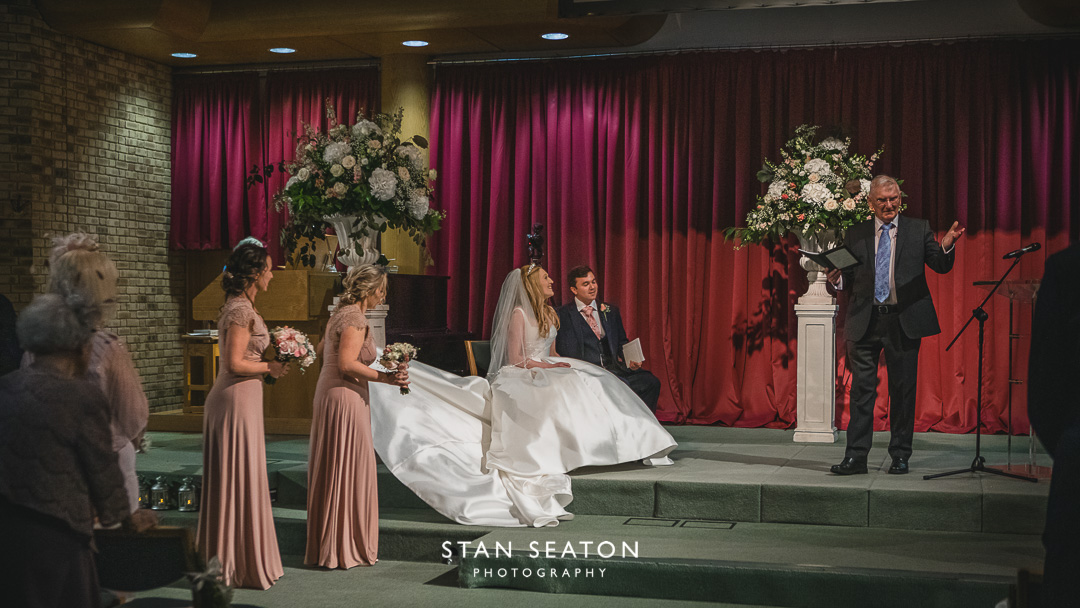 The pedestals made a magnificent statement. We created these beautiful pedestals for the wedding as a focal point at the front of the church. They stood on our classical stands which were hired for the day. They were designed with the same variety of roses and gypsophila used in the bouquets, and we then added stunning hydrangeas to create the wow factor. 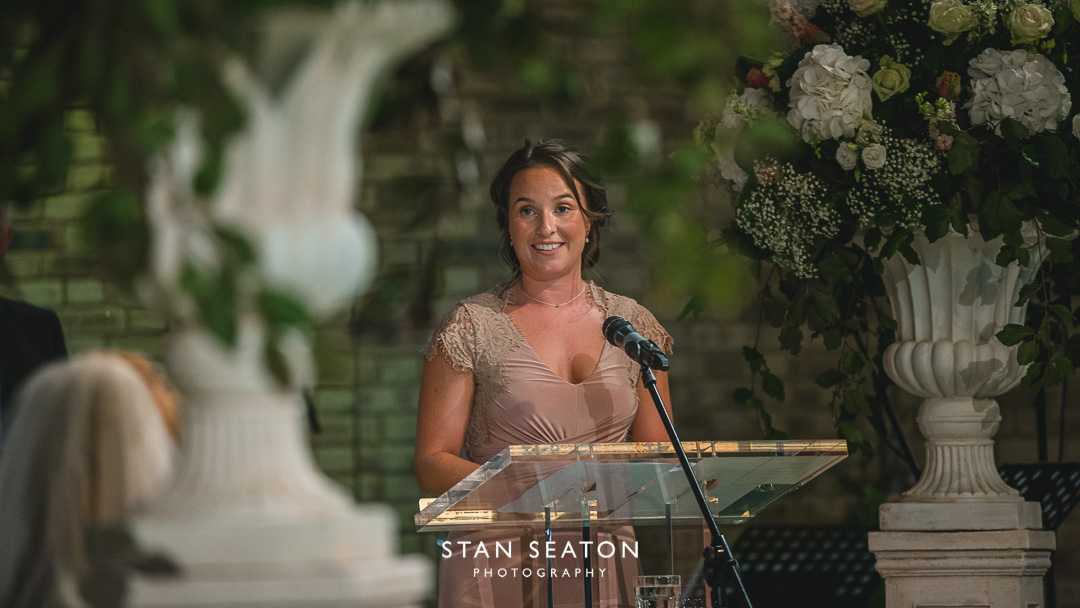 The table used to sign the marriage register was decorated with a long and low using the same flowers as the pedestal arrangements. 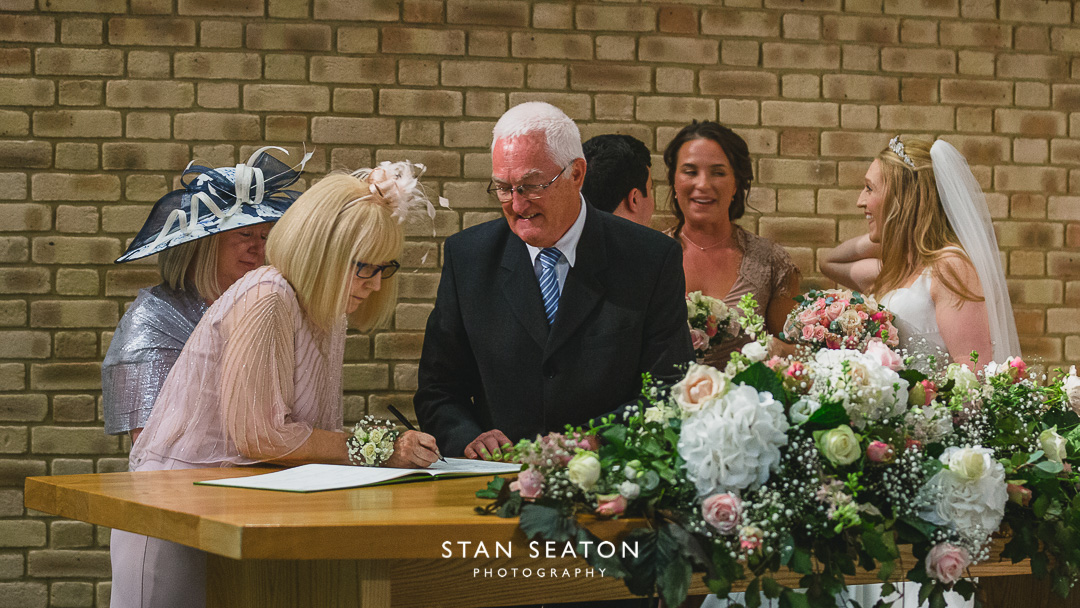 The mother of the bride in the picture above is wearing a corsage we created for her. The design uses spray roses and gypsophila however we kept the colours neutral to match with her outfit of the day. 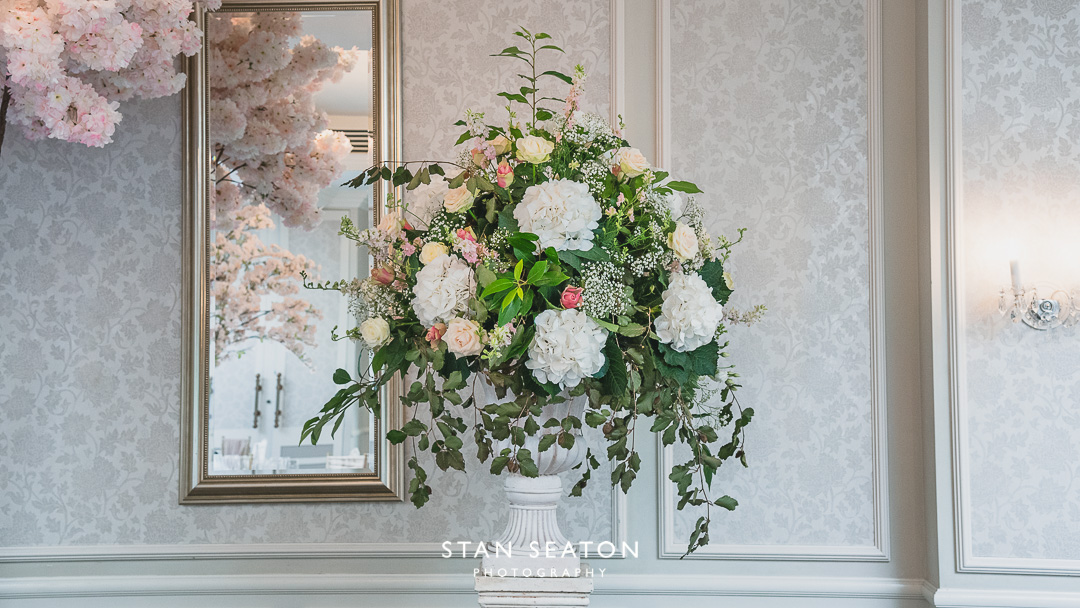 Our team of florists then transported the arrangements to Rockliffe Hall Hotel so the guests could enjoy the couple’s chosen arrangements throughout the day.

We wish Rachael and Brad all the happiness in their new lives together.

Thank-you to Stan Seaton for the wonderful images of our flowers on the big day. 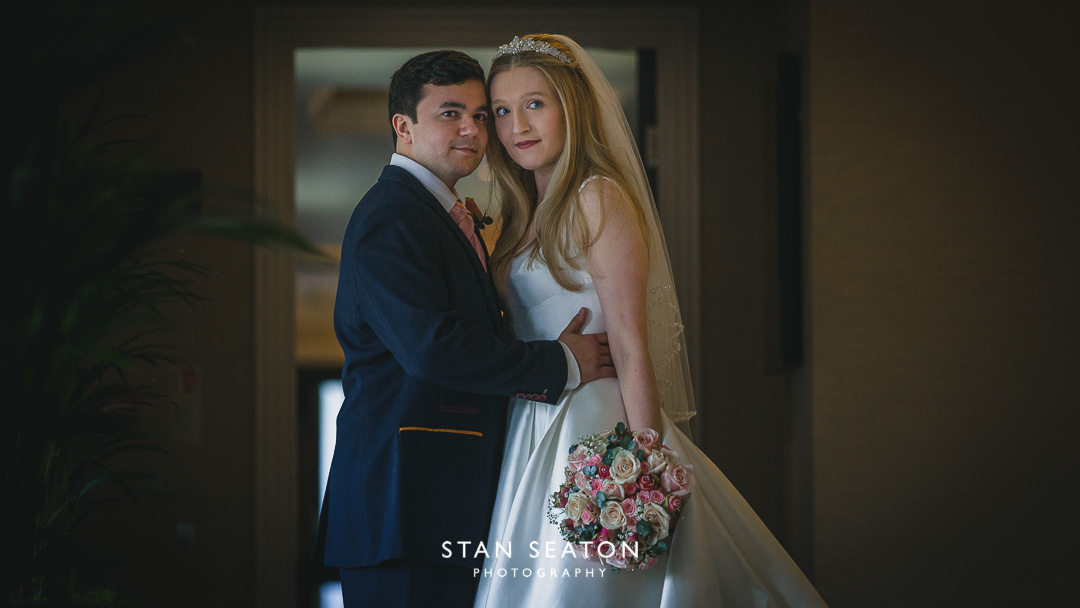 The team at Flowers By Nattrass, will work with you on your wedding plan, to make sure our flowers make of your day something not only beautiful, but magical!

To request a wedding information pack Contact Us and we’ll send you an email. Check our Wedding Page information here.