From its origins as a wildflower in Central Asia to being cultivated by the Turks and then fame in the Netherlands, this is a flower that has remained popular for centuries.

Tulips, the name of which came from the Turkish work for turban, were first cultivated by the Turks as early as 1000AD.  During the Ottoman Empire, the Sultan demanded cultivation of the blooms for his pleasure and mania struck!  Their popularity remained in Turkey and in the early 18th century, the ‘Age of the Tulips’ began, including festivals and the introduction of penalties if tulips were sold outside the capital.

Introduction of the flower to Western Europe came in the late 16th century.  A gift sent from the ambassador of Constantinople (present day Istanbul) to a biologist who was director of a botanical garden in Leiden (Holland) is thought to be the start of the bulb fields the Netherlands has today.

It wasn’t long before botanists started to hybridise the tulip to develop even more decorative and attractive varieties.  These were seen as rarities and a sign of high status, which led to the famous “Tulipomania” in late 1636, where some examples cost more than a house in Amsterdam at the time!

There are over 150 species of tulips with over 3,000 different varieties. The variation of colours and markings we see on tulips today actually came about as a result of a viral infection in them at one time.  These days it is purposely bred into them to stunning effect!  The amount of varieties available won’t surprise anyone who has ever taken a walk down Amsterdam’s famous floating flower market!  The Netherlands is the world’s largest commercial producer of tulips, with around three billion exported each year.

The meanings of tulips

The different colours of tulips hold different meanings – red ones for example represent true love, passion and romance whilst yellow for example signify hope and cheerful thoughts.  Want to apologise to someone?  Then you’d choose white tulips to do that.

There is a near black variety – although no true black flower occurs in nature, many hybrids have been created to get close.  ‘Queen of the Night’ tulips are one of the most popular varieties because of their deep purple petals which appear almost black.

If you cut tulips, they’ll continue to grow in an arrangement or vase for at least another inch.  They’re also phototropic so to minimise movement, stand them in a spot lit equally from all sides.  Their bold colours, beautiful shapes and almost perfect symmetry make tulips a firm favourite around the world.  Tulips are an intriguing flower with a rich history and make a gorgeous gift for any occasion. 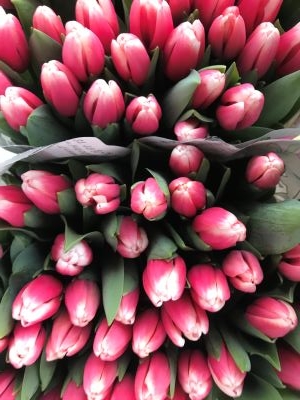 Latest Articles
When a florist’s daughter gets married
Weddings are back!
Reasons why flowers make perfect gifts
A Day in the Life
Tulipmania
Great Gift inspiration for a lockdown Mothering Sunday